On a very windy October day, we took ourselves off to Fort George, just outside Ardersier, near Inverness. We were amazed by how big this fortification is! Built in the wake of the Battle of Culloden in 1746, the fort is still used as a British Army establishment. 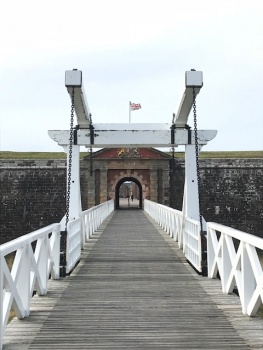 Bonnie Prince Charlie was defeated at Culloden, so George II created this imposing fort against further Jacobite unrest. But after taking 22 years to complete, the Jacobite thread had subsided. Quick side note: combine this with a visit to Culloden Battlefield.

There is so much to see and do at Fort George, we were really impressed and truly great value at £9.00 for an adult ticket. The main rampart is more than 1km in length and a super walk with great views – many across the Moray Firth, which in itself brings an opportunity to spot the dolphins! 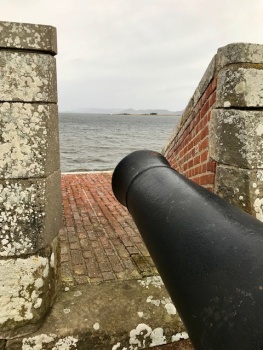 It has a great Highlanders Museum – Scotland’s largest regimental museum outside of Edinburgh.  The museum covers three floors of Fort George’s former Lieutenant Governors’ House and has over 20,000 artefacts and over 10,000 documents and photographs.

The garrison chapel at the far end of the fort was worth the walk. Although you can’t actually get to it, look over the ramparts and see the dog cemetery – one of only two in Scotland – where regimental dogs have been buried.

There are lots of plaques around the entire fort, giving the history and also explaining about the weapons, cannons, barrack rooms, living quarters, and showcasing the story of what life would have been like for the soldiers serving. All the garrison buildings, artillery defences, bayoneted muskets, and swords provide an incredible view into 18th century military life.

We took the audio headsets for free.  Many of the plaques have a corresponding number which you hit to get the audio story. Very useful and highly informative. 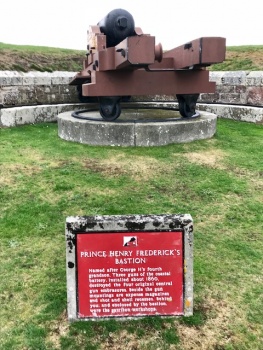 There’s a little shop too and a café.  The fort is very exposed on the peninsula overlooking the Moray Firth.  It was incredibly windy the day we went so be wary of this. An amazing place to visit.

By continuing to use the site, you agree to the use of cookies. more information